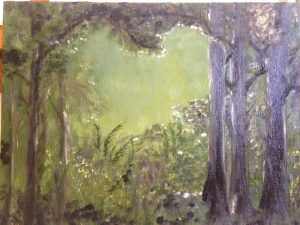 Most of us have dreams without understanding the message exactly.  We can be scared by them, entertained by them, embarrassed by them, you name it, but imagine they are messages sent to help you with your life.  imagine they are the very key to finding the answers and paths to creating a life your soul has longed for, a life that fulfills your special purpose in this world.

I was struggling along like everyone else, trying different avenues in life, changing course when needed, learning from my mistakes, as I made my shaky way through life.  One night, however, I had an amazing dream after I had summoned the courage to stand up to my overbearing mother like never before. In the dream I was walking through the hardships of life with a small band of fellow explorers.  We were learning things that only we were capable of learning, and bringing our knowledge to the masses to help them. I had a tan back with a geometric symbol on it.  Later I slid through a dark wet tunnel with my friends, and ended being greeted by a large leopard face as we entered a world that was always dark as night. I was in my mid-fifties at the time, yet still struggling with issues involving fear and anger. By finally having the courage to calmly stand up to my mother, it was if I had earned the right to join the ranks of this special group of soul warriors.

During the next few months, I continued to have amazing vivid dreams, mostly occurring in the early morning hours.  In one dream a man with bright blue eyes that seemed to be lit from inside him, approached me.  At the time I was unemployed and longing for a fulfilling job of some kind.  He was dressed like a world explorer too, and seemed to have full knowledge of the world.  He looked at me intensely and asked me what I liked to do the most, and I told him that I liked to do my crafts more than anything.  He then walked to a closet door, opened it, and showed me it was filled from top to bottom with grey pieces of metal piping.

The man then looked at me with more intensity than I have ever experienced.  He pointed to the grey pipes and said that I was to do with them what I do with my crafts, and then he left.  I didn’t understand what he meant at first, but the intensity of manner made the dream stick with me as I thought about what it could mean.

A few days later I realized what it meant.  The door to the closet represented the door to the new path I was longing to enter.  The grey metal pipes were symbols of difficult, cold, hard things I would have to deal with on my new journey.  He was telling me that to go down a path that will bring fulfillment, I would encounter things I find hard and unpleasant, and to approach them the same way I do working on things I enjoy like crafts.

I realized that when I work on a craft project, I pick something that appeals to me, I work on it when I genuinely want to, and when it is finished I don’t worry about.  I display it or put it for sale, and enjoy it.  What if I did everything that way?  What if I did everything from cleaning my house, to working at a challenging job, to doing home improvement projects the same way I work on crafts?  I realized I could do this, and approaching anything like this would make everything I do part of an enjoyable adventure rather than a dreaded chore.  Doing everything like this would energize me, and make me more invested in what I was doing, enabling me to be more productive in ways of greater significance.

As the weeks passed, and I had more dreams like this, and realized more and more about myself.  For example, I had a dream where I was arrested because I was riding in the passenger seat of a car.  I told the officer that it wasn’t fair, and he said, “no it wasn’t.”  This dream made me aware that I often sit in the passenger seat of life, and let others call the shots, and that this isn’t being fair to myself, and I needed to step up and take charge of my own life.  As dreams like this empowered me, things in my life began to change.  I found a job I loved, my craft creations evolved into bigger and better things, my relationships were easier and more joyful, I worried less, and things I had always wanted began falling into place.  I had become more honest, courageous, insightful, intuitive, calm, and was sleeping better, all because of my dreams.

I began by asking friends and family to tell me their dreams, and helped them to understand.  Then I became a Certified Dream Therapist, read some books by dream shamans like Robert Moss, and attended several of his workshops.  By embellishing on the Lightning Dreamwork Process created by Robert Moss, I came up with the following easy way to understand my dreams, and get the most of out them.  I invite you to see if it works for you.

Guidance from the other side is powerful magic, and by practicing a little awareness, and having the willingness to act on a message, you can take advantage of this resource designed especially for your soul.  Wake up to your dreams!

This site uses Akismet to reduce spam. Learn how your comment data is processed.