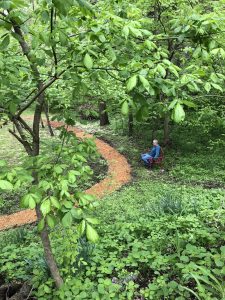 Everything you hear these days, from spiritual leaders in Oprah Winfrey’s book “The Path Made Clear,” to Life Coach Martha Beck’s advice in her best seller “Finding Your Way In A Wild New World,” seem to be giving two conflicting messages. On the one hand they say that in order to live your most authentic, fulfilling life you should live your truth, and let fears of social objection take a back seat. On the other hand they say to be still and listen closely to your body, and to use negative physical reactions as guides to making choices that are more harmonious and healthier for you. So which one do you do? Do you tremble in fear, sometimes getting to the point of being physically ill while you charge ahead making bold life choices, or do you let your fear serve as a warning signal of dangerous situations and actions, and avoid them, perhaps cheating yourself out of enriching your life?

After experiencing the consequences of taking some risky action lately, even though a voice inside me was fearful, to the point where I had some clear dreams of danger ahead, I came up with a simple method to help make the best decision. First of all, if you are thinking of doing anything at all risky, that in itself warrants taking a moment of stillness to check in with yourself to see if you are feeling fearful. This sounds easy, but when you’re determined to do something, it can be hard to think to take a minute and let it settle in you before taking action.

Once you are aware that you’re feeling somewhat fearful, let that be your cue to take a step back, and apply some wisdom to the situation. In other words, be W.I.S.E.

I have found that it’s easy for me to take bold action, marching past my fears, if I believe I’ll get a reward that will serve my social ego. In other words, if I’ll get approval or a feeling of accomplishment or superiority according to our social rules and expectations, I am more likely to forge ahead, possibly discovering unwanted consequences in the end. If I take ‘receiving social rewards for my ego’ out of the picture, and let myself reflect on taking the action without any social recognition of any kind, it is much easier to evaluate whether it is worth the damage it could cause, or benefits it could create. In my experience the universe tends to keep my soul on track, and my ego in check.

So next time you consider taking bold action, take a minute, weigh in the reasons why your social ego might want you to do it, and consider if those reasons are really in the best interest of having a calm, happy, creative worry-free life. Sometimes courageous moves break us free to do the things that make us the happiest in the quietness of our souls, and sometimes they simply bring pain, struggle, and drama, minimizing any social reward they might bring. The only one you really have to answer to is yourself, so be kind, thoughtful, and WISE.

In my search for ways to improve my life, I read Martha Beck’s book, “Finding Your Way In A Wild New World,” and decided to give her approach a try. Although the book is brimming with great methods and ideas, I decided to try her magical method of asking for specific things you want, and making them happen.  You begin by asking the universe, God, the Everywhen, or whatever you want to call it for something you want, for something that would improve your life and bring you joy, then imagine how you would feel if you got it, then let it go, and go about your life. As you go about your life, be aware of messages coming to you in unexpected ways that will bring you exactly what you want. They can be words from a friend, a stranger, something on TV, in a book or magazine, or that brilliant idea that suddenly pops into your head. Voila, you got want you wanted. She says to begin asking for small things, and build up to the big ones. So I tried it….and it worked. Here are some examples of how this “magic” worked in my life recently:

How I Turned A Busy Commute Into A Joy Ride

While working for a local nonprofit, I enjoyed the work, but the commute every morning was killing me.  Every morning I left my peaceful street in my quiet small town, and boom, I merged right into heavy fast traffic on a busy truck-filled highway.  Not the pleasant drive I had envisioned when I took the job.  I thought about alternate routes on my way, but they had challenges too and would make my trip much longer.  At my wits end, I decided to try Martha’s technique again.  I asked the universe for a low-stress commute to work, then I imagined how I would feel if I had it.  No cars around, just me buzzing along…how nice that would be!  Then I went about my life without giving it much thought.  A couple days later I woke up with an idea.

I remembered an intersection on the highway with a traffic light that was located before the entrance ramp where I merged on to the highway.  It was only about five minutes out of my way.  I tried it that morning, and it was a miracle.  The traffic light served to break up the traffic so I entered the highway with very little cars.  I drove along with virtually no cars around me until I reached my turn off.  By that time the mass of cars and trucks stopped by the traffic had just caught up with me.  It was perfect.  Every morning it was the same.  I honestly believe the idea came to me simply because I asked for a solution, then let go of my negative worrying long enough so the answer could come to me.  Thank you Martha!

The Amazing Way I Saved A Baby Bird

As I mentioned earlier, Martha’s technique for getting what you want works for big things as well as small things, and the more I use it, the better my life gets.  Here’s a small, but amazing example for how it worked for me on the day I found a bird in distress.

I live on a tree-lined street in a small town with a sidewalk between my front yard and the strip of grass where the trees are.  I was looking up in one of these trees at some dead branches that needed to be cut down, when I heard some pretty loud chirping.  I looked down and there was a bird just sitting in the grass near the tree.  I looked closer and I could see it trying to move, but not getting anywhere.  I cringed.  I looked up and saw a nest in the tree that I figured the bird fell out of, although it didn’t look like a baby.  I thought it could’ve just  been stunned, and may recover and fly off, so I went inside my house for awhile.

A few hours later, I went to check on the bird, and it was still there.  I got very concerned imaging dogs, cats, or raccoons getting it before long, but didn’t know what to do with it.  I asked the universe what to do with the bird, and I imagined how happy I would feel if it was OK.  A few minutes later, I heard someone from across the street yell over to me, asking me if I lost something.  It was a young man, walking by himself, a little rough looking, but clean cut.  I told him about the bird, and he came over to see it.  He then told me that his boys would love to take care of the bird, and if I had a box, he would take it with him.  He was a country boy, so I felt confident that his boys would really like it.  He went on to tell me that his younger son loves to catch worms.  I ran inside, found a box, and when I reached down to scoop up the bird, he turned his head back, and opened up his little beak, expecting me to feed him.  I then realized it was a baby bird that fell out of the nest, and that he was big, but not quite ready to fly.

We put grass in the box, the man walked off with the bird, leaving me with tears in my eyes.  My life has improved, been enriched, and continues to take magical turns, as I practice Martha’s technique.  With the world changing, getting faster, and more crowded, it’s nice to know a simple way to quietly steer things peacefully your way, as you make the world a better place.